Dagger, a Black Lab/Golden Retriever mix, was born in Santa Rosa, CA on October 6, 2012.  Before Dagger became known as “DogVinci~The Do-Good Dog,” he was working towards becoming a Service Dog for Canine Companions for Independence (Canine.org). During Dagger’s training, he learned how to push drawers and doors closed and hold objects in his mouth.  However, he was not able to fulfill his duties as a Service dog because of fear issues, so his life’s leash took a different path.
Dagger was adopted by fine artist, Yvonne Dagger.  While in her studio one day during the summer of 2015, Dagger sat faithfully and watched while Yvonne painted.  Then, suddenly, Dagger approached Yvonne and “nudged” her with his snout.  Jokingly, Yvonne asked Dagger if he wanted to paint. His tail began to wag.  At that instant, Yvonne took a table-top easel and canvas and set them on the floor. She utilized the command words Dagger had learned in Professional Training at Canine Companions and within a month, Dagger had learned how to paint.  All Yvonne had to do was place a brush in Dagger’s mouth and with one simple command, “paint,” Dagger immediately went to work creating amazing artwork–where each and every stoke of paint on the canvas is placed by Dagger himself.

In the early spring of 2016, when a journalist from Newsday, Patricia Kitchen, came to visit Dagger in his studio to write about this talented canine artist she said that, at first, she was skeptical about whether his story was even true, but when she arrived, she was amazed at what she saw.  Her article, which appeared that weekend went viral all over the world. Within two weeks, Dagger had over 150 commissions for paintings. It was even on the front page of the Daily Telegraph in the UK that weekend!  Since then, Dagger has sold over 800 paintings with proceeds of all sales going to animal & people related charities and causes.  Dagger has donated over $150,000 to date to charity. Today, Dagger’s remarkable talent has made him affectionately known as, “DogVinci ~ The Do-Good Dog” and he continues creating colorful masterpieces for the world to purchase and admire. His message of sharing kindness through creating, learning and inspiring resonates in all that he does.

He has been on the Rachael Ray Show, Animal Planet’s “Cute as Fluff” Show, The Today Show, in Newsday numerous times, on Inside Edition, in Mashable and The Daily Telegraph UK, The South Korean Newspaper…. just to name some.  He has had Eyewitness News, CBS, FOX TV, PIX11, Brazil TV, The Tribecca Film Festival, a journalist from South Korea, Eunkyung Koh, as well as other numerous media outlets come to the studio to film and watch Dagger paint. A documentary was made of Dagger…”DogVinci: The Documentary.”  Penny Leigh, a journalist for the AKC Family Dog Magazine, wrote an article titled, “State of the Arf” about Dagger DogVinci’s life as a canine artist.  The article was featured in their May/June 2017 Publication.  Dagger was named “Bethpage Best of L.I. Artist/Painter” in 2018, 2019, 2020 and 2021, respectively.  This prestigious award is given to one individual who exemplifies excellence in his/her field.  Jen Reeder from Just Lab magazine wrote an article about Dagger titled “The Do-Good Dog” which was featured in their July/August Issue centering on Dagger good works. Dagger was on Eyewitness News’ “Hidden Heroes” Show where he was the only non-human recipient to receive the honor of a hero. Woman’s Day wrote an article about Dagger and was featured in their 2019 May Issue.  Dagger has also been featured on Australia’s Show called “Get Arty” in early 2019.  In addition to Dagger’s success, he is a part of a children’s book published by Penguin Random House called “Amazing Dogs with Amazing Jobs” written by Award Winning Author, Laura Greaves.  Go to www.DogVinci.com to order your copy…there’s free shipping world-wide.  Dagger was featured on CBS Inside Edition’s Show “The Breakdown.” Dagger also did a painting demonstration at the AKC Museum of the Dog in NYC in December 2019 in their library.

Before the COVID 19 Pandemic, Dagger was holding “DogVinci” Workshops at libraries, schools and nursing homes. They became so popular that places were clamoring to be able to have Dagger appear at their library or school. Children would wait patiently to be able to see and pet Dagger.  Dagger’s workshop consisted of Yvonne giving Dagger’s history and style of painting and a painting demonstration by Dagger.  Right after Dagger’s painting demonstration, the students would make their way over to tables set up with easels and canvases where they would be able to paint in the “DogVinci” style of painting which is pure true abstract art.  Yvonne teaches the students about abstract art and tells the students that they’re painting from their hearts.  During the workshops the students learn that Dagger’s message of “Education and Community Service” is central to all that he does. Yvonne and Dagger are very hopeful that soon they’ll be able to get back to holding Dagger’s Workshops in person again.

In addition, Dagger is featured on the PBS show “Shelter Me ~ The Art of Kindness” which was filmed before the pandemic. It’s a show about the animal & human bond and how they help one another. Dagger’s episode is hosted by award winning actress, Wendie Malick and has been airing all across the USA since February 2021.

On July 1st 2021 ,  Dagger’s Episode of the “Shelter Me ~ The Art of Kindness” Show was live streamed with a Q&A at the end of the show where Dagger’s fans and viewers were able to ask Yvonne & Dagger anything about Dagger’s life and career as a famous canine painter, but most importantly, how he became the “Do Good Dog.” Due to its popularity, there will be more webinars to come soon!

To add to Dagger's success, he was just inducted into the "Animal Heroes Hall of Fame." This prestigious honor was given to Dagger on August 18, 2021, for his artistic ability and his charitable giving.

We are also excited to announce that Dagger DogVinci will be featured in a new book! "ADVENTURE DOGS": ACTIVITIES TO SHARE WITH YOUR DOG -- FROM COMFY COUCHES TO MOUNTAIN TOPS written by Fern Watt.  We shared with the author how Dagger learned to paint with the hope that it inspires other humans to spend more time doing fun activities with their dogs. In a world that can sometimes feel scary and uncertain, we could all use a little more time with our pups. The book is available everywhere books are sold! Preorder on amazon or please support your local bookstores if you can!!

Dagger has also made his mark throughout the world by being included in Oxford University's Workbook teaching students all over the world learning English as a second language. What an honor and unbelievable legacy this is!!!

Dagger will also be exhibiting in the first ever…
Biennale of Animal Artists
Cecilia F. Gallery
4 rue des guillemites
​Quartier du Marais, 75004, Paris
*Due to the Pandemic the date of the show is forth coming…

Everyday Dagger’s life as a canine artist grows and grows. None of this fame goes to his head.  He’s a gentle soul who just happens to be the love of everyone’s life.

In addition to Dagger’s artistic ability as a canine painter he is a certified therapy dog for Therapy Dogs International (TDI).  Dagger goes to nursing homes libraries and schools visiting the residents and children bringing love and comfort to everyone he meets. 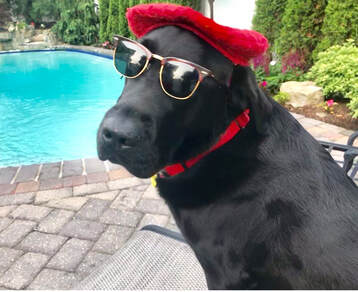